Hello and welcome to the Oxford University Physics Society (or PhysSoc for short)! This year, we have plenty of events on, including talks, socials, extracurricular classes and much more. This isn’t a society just for physicists; this is a society for anyone who is interested in physics, its applications, and physics-related topics. To find out more, have a look at our Youtube channel, our Facebook page or subscribe to our mailing list.

How do I get involved? Simple. Head over to the How to Join page and follow the instructions there.

Join us next Wednesday for a talk on GR, black holes and the strong cosmic censorship conjecture by Dr. Jan Sbierski. Here is his abstract for the talk:

Come back on Wednesday for the link to the Zoom call.

Check out our speaker here: https://www.magd.ox.ac.uk/member-of-staff/dr-jan-sbierski-2/

Here are the events we have lined up for you this term!

On Thursday, Ian Shipsey will introduce you to the science of cochlear implants! He will also tell you about his own experience with a cochlear implant which allowed him to regain his hearing after over a decade of being deaf. Here is his plan for Thursday:

Cochlear implants are the first device to successfully restore neural function. They have instigated a popular but controversial revolution in the treatment of deafness, and they serve as a model for research in neuroscience and biomedical engineering. After a visual tour of the physiology of natural hearing the function of cochlear implants will be described in the context of electrical engineering, psychophysics, clinical evaluation, and my own personal experience.

The audience will have the opportunity to experience speech and music heard through a cochlear implant. The social implications of cochlear implantation and the future outlook for auditory prostheses will also be discussed.

About the speaker:
Ian Shipsey is a particle physicist, and a Professor of Physics at Oxford University. He has been profoundly deaf since 1989. In 2002 he heard the voice of his daughter for the first time, and his wife’s voice for the first time in thirteen years thanks to a cochlear implant. The presentation will be at the level of Scientific American.

For this Wednesday class, Prof Christopher Beem will be giving a talk about string theory! Here is what he has planned for us:

String theory (in its most traditional form) postulates that the basic dynamical objects of the natural world (or perhaps of some other hypothetical world) are not the point particles of traditional particle physics, but instead are fundamental strings, which have a single dimension of spatial extent. When combined with the general principles of quantum theory, this string postulate has many surprising consequences which have motivated extensive research in the area over the past half century. In the first half of this lecture, I will provide a speedy recap of several of string theory’s best known claims to fame, as well as some of the challenges facing the subject at present. In the second half of the lecture I will explain that in a stringy world, our most basic intuitions of the structure of space(time) itself can be radically modified. These ideas are not only physically fascinating, but they have led to important insights in the world of pure mathematics.

Check out the speaker here: https://people.maths.ox.ac.uk/beem/

This Thursday you will have the opportunity to learn about ultracold atoms from Péter Juhász! You might remember him from his Varsity Sci talk which we got to host last month. Here is what he will be talking about:
If we are looking for the extremes of the Universe, chances are that we will not find them on Earth. However, when looking for the coldest (coolest) place anywhere, it’s better to look towards physics laboratories rather than the night sky. In this talk, I will describe how such low (few nK) temperatures can be attained and in what ways these ultracold atomic gases are used to test and explore many-body quantum physics.

For our first extracurricular class of the term we have Professor Seamus Davis. He will be talking about magnetic monopoles. Here is his abstract:
Magnetic monopoles are hypothetical elementary particles exhibiting quantized magnetic charge and quantized magnetic flux. A classic proposal for detecting such magnetic charges is to measure the quantized jump in magnetic flux threading the loop of a superconducting quantum interference device (SQUID) when a monopole passes through it.

Naturally, with the theoretical discovery that a plasma of emergent magnetic charges should exist in several lanthanide-pyrochlore magnetic insulators including Dy2Ti2O7, this SQUID technique was proposed for their direct detection. Experimentally, this had proven extremely challenging because of the high number density, and the generation-recombination (GR) fluctuations, of the monopole plasma. Recently, however, theoretical advances have allowed the spectral density of magnetic-flux noise due to GR fluctuations of magnetic charge pairs to be predicted.

In response, we developed a high-sensitivity, SQUID based flux-noise spectrometer to measure the frequency and temperature dependence of magnetic flux noise for Dy2Ti2O7 samples. Virtually all the predicted features of the magnetic noise coming from a dense fluid of magnetic monopoles were then discovered emerging from crystals of Dy2Ti2O7. And, because this magnetic monopole noise occurs at frequencies below 20kHz, when amplified by the SQUID it is actually audible to humans: Nature 571, 234 (2019)
https://www.nature.com/articles/s41586-019-1358-

Check out his research here: http://davis-group-quantum-matter-research.ie/

The `standard model’ of cosmology is founded on the basis that the expansion rate of the universe is accelerating at present — as was inferred from the Hubble diagram of Type Ia supernovae. There now exists a much bigger database of supernovae so we can perform rigorous statistical tests to check whether these `standard(isable) candles’ indeed indicate cosmic acceleration. We find, rather surprisingly, that the inferred acceleration is mainly along the direction we seem to be moving with respect to the cosmic microwave background. It cannot therefore be due to the Cosmological Constant (aka vacuum energy), even though a variety of observations are supposed to have meanwhile confirmed its presence. This is an exciting time to be a cosmologist!

Check out our speaker here: https://www2.physics.ox.ac.uk/contacts/people/sarkar

You can find events from the previous academic year here: 2019-2020 Events Archive 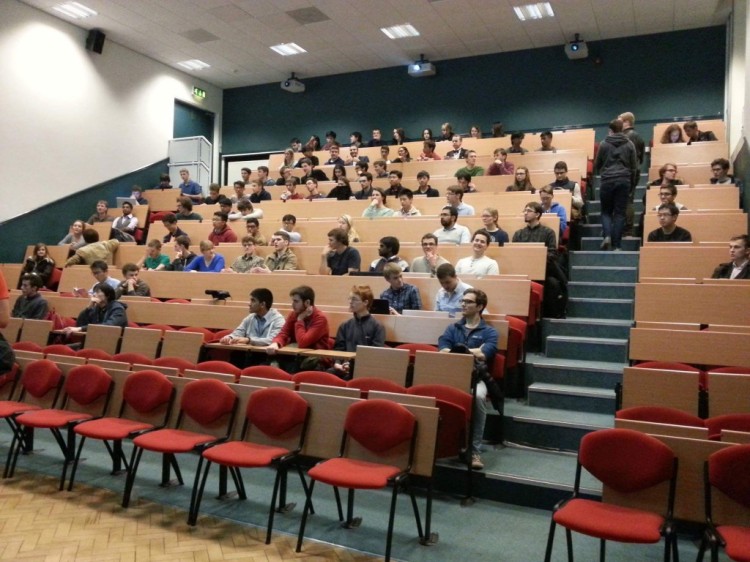 Physics Society hosts a physics based talk most Thursdays at 8pm now on Zoom. All talks will be uploaded to our youtube channel after the event!

These events are open to non-members and are all free.